As much as it can be a solitary affair, the act of crafting is also about community, the exchange of ideas and embracing the creativity that lies within ourselves and others. For the past three years, DozenOdd Galleries, located on Water Street in Carbonear’s heritage district, has been helping those in the community and surrounding areas tap into their inner artist, while offering a platform for established artisans to sell and promote their work. 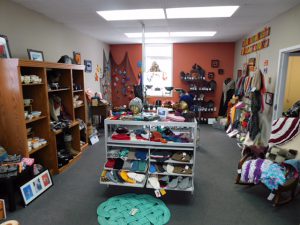 Since their inception, DozenOdd has hosted an array of events such as their Stitches of Remembrance project to commemorate the 70th anniversary of D-Day in 2014 (whereby community members were invited to knit patches of colourful wool to cover the cannon in Carbonear’s War Memorial Park); and Culture Days, where various artists demonstrated skills from bodhran playing to pottery making, giving people an opportunity to meet the artists and learn more about their artistic processes. They have also hosted everything from crochet classes to knitting clubs, giving members of the community the chance to socialize while learning a new skill. 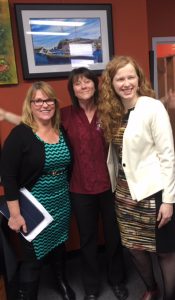 “We have a Craft Club Crowd that meets at DozenOdd every Wednesday afternoon to work on projects like the Winter Games scarf project, hats for preemie babies, etc. This will be DozenOdd’s fourth year hosting World Wide Knit in Public Day (happening this year on June 10). We do yarn bombings and fun things. Seasonal events include Christmas and Valentine’s events at the gallery where we provide entertainment and food,” Flood says.

In addition, DozenOdd offers classroom space, at a minimal cost, to crafters who wish to pass on their skills and knowledge, and classes and projects for youth during community events like the annual Winter Carnival and Carbonear Days.

“Support from the community has been great,” Flood says.

Recently, DozenOdd were awarded a $25,000 grant under the New Horizons for Seniors Program, which will allow seniors in Carbonear and the surrounding communities to showcase and share their skills – enriching the communities in which they live while passing the torch.

“(We) will be working with seniors over the next year to develop crafts skills and pass on traditional skills to the community,” Flood says.

Through their inclusive model, DozenOdd is helping the spirit of craft, and community, flourish in Carbonear.