Natalie Austin of Carbonear has used the skills she developed from her own artistic talent to earn a nomination for the Newfoundland and Labrador Organization of Women Entrepreneurs (NLOWE) youth entrepreneur of the year award. 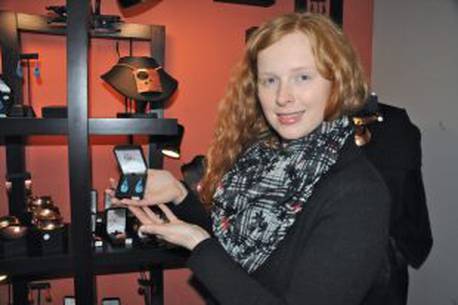 Natalie Austin is an entrepreneur in Carbonear who makes her own jewelry from recycled copper pipe.

To get nominated for the award, a young woman under 35 years of age must have began her business between two and five years ago, and demonstrated success and profitability over that time.

Less than three years ago, Austin, owner of Natalie Jewellery, decided she was going to start making high-end, one-of-a-kind jewelry pieces, an art that takes a lot of time and energy. Austin, a copper-haired, fair-skinned woman, didn’t know at the time it would turn into a business.

“I just wanted to make jewelry,” she told The Compass from DozenOdd, a gallery that showcases her work alongside work from other artists on Water Street.

Austin creates her jewelry from her personal studio, moulding and shaping pieces out of copper pipe and other materials that many would consider trash. All of the products she uses are either recycled, ecofriendly and/or ethically sourced.

But why copper pipe?

When Austin decided she would be making earrings, necklaces and other jewelry pieces, she set up an anvil in her father’s basement when a piece of copper pipe fell.

She will not use new copper pipe, saying the used has more, “character.” And looking at her selection of jewelry at the gallery, it is obvious what she means.

Each piece has unique marks and bumps, so no two are alike.

Austin has been selling her pieces since Christmas 2011, only five months after beginning her venture, and she measures her success through how much she has grown, noting she is always finding new techniques and materials to use.

“Where do I go from here? I’ve only scratched the surface,” she said.

It was no surprise to many of those she knew that Austin would enter a creative profession since she has always had a flair for culture and art. She is also a juried member of the Craft Council of Newfoundland and Labrador.

Austin joins fellow Carbonear entrepreneur, Shannon Doyle, with a nomination for this award.